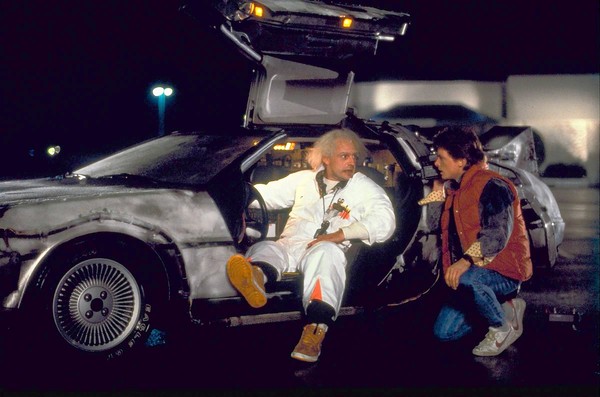 Fire up the Flux Capacitor and the DeLorean, we are going on a trip.  Warning this trip might be very uncomfortable for many.  It could bring back memories of strife, anxiety and possibly remind us of some really regretful choices we had made in the past.

We are going to visit a few stock market crashes and corrections over the past three decades!

Our first stop will take us back to October 1987. The stock market has been all-out party mode with a 30% move to the upside for the year so far.  However, some ominous clouds are starting to appear on the horizon.  Economic growth started to slow, while inflation appeared to be picking up with interest rates starting to rise.  The overall market price to earnings ratio climbed above 20 with a divergence between further earnings growth and market performance.  So, the story goes…One bad Friday (Oct 16th) lead to a really bad Monday October 19thwhere the Dow fell 22.6%.  Who started the sell-off and why is still unknown to this day.  Some have speculated that there were trading issues from institutional investors that exacerbated the crash using a technique called portfolio insurance.  There were also no circuit breakers in place that would slow this process down like we have in place today.

From 1997 to 2001 we had the mother-of-all speculative tech bubbles.  If you had a goatee, a foosball table in the break room and a dotcom attached to your name, Wall Street was throwing money at you.  Excessive speculation in countless companies that had business plans that were pathetic and sad at best, coupled with all of the brand-new discount firms and online trading platforms that preached the gospel that everyone could have their own private island, were the catalysts that fueled this bubble. In 1999 the S&P rose 19.5%. However more stocks fell than rose due to the fact that everyone was selling all their non-dotcoms to buy more dotcoms.  The Nasdaq composite rose 85.6%.  The greatest gain for any major index in history for the United States.  The top performing stock was Qualcomm which rose 2,619%.  There were twelve other stocks that rose over 1000% as well.  Another seven were up over 900%.  On March 10, 2000 the Nasdaq composite peaked at 5048.  Over the next 30 months it dropped by 78%.  All of a sudden, reality hit!  Earnings actually do matter, and all of these companies no longer had access to venture money.  It all came down to what they had and their burn rate.  You could almost set the date when the company would close up and you go in and get the foosball table and the Herman Miller office chairs on the cheap.

On to the Great Recession.  From October of 2007 to March of 2009 the S&P fell 55%. I have written extensively on the many causes of this calamity that hit the market like a bat to the head. However, I do feel that even though many issues at the time were most certainly real, they were also amplified and distorted by the media and incompetent leadership out of Washington. One particular day during this period of note, was September 29th, 2008.  That day the House of Representatives defeated the White House’s first financial-rescue-package.  At that moment in time the Dow sustained its biggest point drop in history.  It was the greatest market drop since the September 11 attacks.  For the day the Dow was down 7% shedding 777 points.  The Nasdaq was down 9.1% on the day.  For the entire calamity the S&P peaked in October of 2007 and subsequently fell 55.2% by March of 2009.

Our next destination will take us to May 6th2010.  There were all sorts of fiscal problems coming out of Europe, with Greece looking like it was about to collapse.  Couple that with an economy that was pretty darn morbid.  On top of that we were told that we had a trader with a fat finger.  The market dropped 60% in an instant.  It came right back, but still??  At the time, the crash was blamed on a trader’s fat finger hitting the wrong button.  I found that reasoning absurd.  Even in the movies, it usually takes a redundancy coupled with a countdown clock when someone hits the self-destruct button.  At that time, the high frequency traders were becoming quite the force on Wall Street using algorithms to trade in milliseconds, I believed at the time that they had something to do with this mess.  In April of 2015 a London-based trader named Navinder Singh Sarao was arrested for his alleged role in the flash crash.  The charges brought by the U.S. Department of Justice stated that he used an automated program to generate large sell orders, pushing down prices, which he then cancelled to buy at lower market prices.  He made $40 million on the trade.  He is currently awaiting extradition to the United States.  Don’t hold your breath.

Our trip down memory lane took us to four different occasions where the market has sold off a significant amount.  These instances were more acute and somewhat more unique than the many other occasions where the market has sold off.  Most people have no idea that the S&P 500 has actually fallen at least 14% on five separate occasions since 2009.  We forget how often it occurs, and therefore it makes the current correction seem somehow different or worse.  These last five corrections have taken seven months on average for equities to regain their footing and for volatility to subside. During these periods, markets become overly sensitive to headlines and are prone to more wild swings.  Many of the headlines that are moving markets today would have gotten little to no attention in 2017.

For to be wise is only one thing-to fix our attention on our intelligence, which guides all things everywhere.

There has never been a correction in the overall market that has not proven to be an investment opportunity.  For many investors navigating financial storms and correction can be painful to watch.  However, if you own quality; companies that are properly valued with excellent fundamentals, you shouldn’t lose sleep at night.  There is an old saying that is not politically correct today, but I am not politically correct…Corrections separate the men from the boys.  They can test the faith of the most ardent value/fundamental oriented investor.  Being fixated on your portfolios market value during a calamity, you will just give yourself a strong case of agita which will put you on a path of poor choices.

Listen to Heraclitus, use intelligence, not emotion.